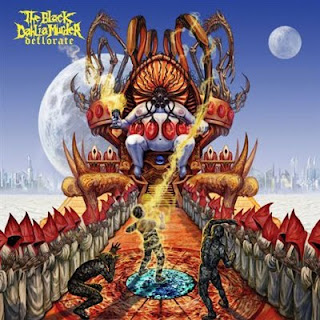 The Black Dahlia Murder may be one of the world’s most popular band which able to combine Scandinavian melodic death metal with blackened thrash, which in of themselves are both combinations used to excellent effect.Vocalist Trevor Strnad’s lyrics have always been a strong point in the band’s music and he fails to disappoint on this album. Over the album’s course Strnad’s poetic, loquacious style covers a wide range of morbid topics ranging from deformity and suspended animation to cities of the dead.Clocking in at just 34 minutes long, the ten songs blow by at fantastic speeds. The hyper-sonic riffs and seemingly constant blast beats fire every song away like a rocket. But in turn, there is so much material packed into each song that the album feels like a marathon of brutality.Since the band's previous releases have been shaky at best--Unhallowed had some promise but Miasma and Nocturnal hardly escaped the clutches of the sordid-- Deflorate caught me off guard. It demonstrates the beginnings of a true command of the melodeath genre by The Black Dahlia Murder, and I am eager to hear the music they will, inevitably, make in the future.

Kungfu Rick - Fragments Of The Past Time 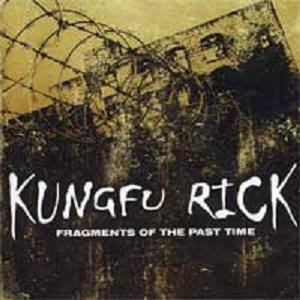 Kungfu Rick was a Hardcore/Power Violence band from Chicago, IL They played a dizzying display of brutal Grind violence with a raw punk energy. They also had dual vocals, one the now infamous leader of HWC inc. Tommy Camaro, and second a masked man named "The Dark Enforcer".They released a number of 7" albums and before calling it quits, though their Facebook page has seen some activity recently, 625 Thrashcore released basically their entire discography on two CDs entitled Fragments of the Past Time. This release is an insane blasting, ear crushing midwest grinding fastcore. This release is one gigantic, fan-friendly chunk of powerviolence. You'd probably think that two discs of this stuff would amount to a total of 30 minutes knowing how some of these bands opted for the 20-second format, but Kungfu Rick's discography here is well over 50 minutes, per disc.Kungfu Rick were a tight band and navigate the tempo shifts successfully but that’s not enough to prevent it from becoming numbing after awhile.At the time, these guys were compared to MÖRSER and other German grind units, but their over-the-top live shows, the intelligence of the lyrics, and above all, the brutality of their music, have gained them now cult status.
This double CD discography collects everything this head-crushing unit ever did, plus a few unreleased morsels mixed in for good measure. Enjoy. 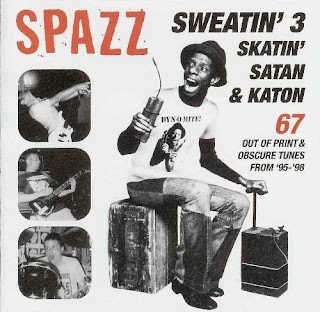 Spazz was an influential American powerviolence band active between 1992 and 2000. The trio released numerous records within this time, many of which are now highly collectible due to their relative rarity."Sweatin' 3" is part three of a three part series from SPAZZ that collects rare, obscure and out-of-print tunes. It is also their first posthumous release. It containzz 67 songzz from splitzz with 25 TA LIFE (the most infamous SPAZZ release ever), MONSTER X, GOB, L.O.I., OPSTAND, BLACK ARMY JACKET, SLOBBER and HIRAX plus the complete "Tastin' Spoon" 5" and several compilation trackzz including the scarce classic "Gummo Love Theme."They’ve stretched their back catalog to three volumes and this CD was the final installment. the only single that is absent is the limited to 300 jeb ep that came out after this disc but really isnt much of a loss. for those of you who are not crazy for vinyl this is essential. intense blast beat mayhem that still remains catchy and the songs distinguishable from the last. once you own this and know its greatness you should finish Bridges, Jesus Philbin, Funeral Shock, Scholastic Deth and What Happens Next. 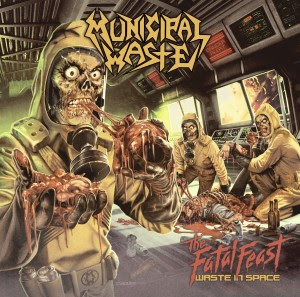 This is the last known studio album by these american crossover thrash finest; Municipal Waste, released in 2012 under Nuclear Blast Records. The number one band in modern crossover thrash metal is without a doubt Municipal Waste. They've made a name for themselves through producing some of the most headbangable thrash metal you'll come across, as well as through more-or-less ridiculous gimmicks like having beer bongs as an integral part of their live shows, or having people wake board over the crowd instead of regular crowd surfing, and stuff like that.In The Fatal Feast the crossover wheel is hardly reinvented with respect to the band’s first three records. However, the acquired benefit of maturity from the band’s previous album is more than evident. Contains 16 tracks, this album shift in varying degrees between different influences within the crossover spectrum such as brutal thrash, chugging hardcore, and melodic punk. However, one major note is how the band have upped the ante in the prime riffing department as these riffs are just so damn satisfying and rank up there with the band’s best. The other major characteristic that stands out is how the band’s has continued to improve in the songwriting department.For everyone who know nothing yet about this band, i tell you this; If you love bands such as: Suicidal Tendencies, D.R.I., S.O.D. and early Exodus, then you will love this band. It's old school thrash played well. There is no filler or lengthy melodic guitar solos. Just straight up thrash with a really nice punk rock influence.

Against Me! - Searching for a Former Clarity 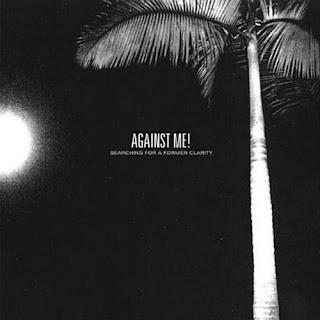 This "Searching for a Former Clarity" CD was the third full length studio album by these Gainesville, Florida punk rock band Against Me! that released in 2005 under Fat Wreck Chords. Against Me! is probably the best punk band to arrive on the scene since 2000. If you haven't already picked up the brilliant "Reinventing Axl Rose" and "As The Eternal Cowboy", you've missed out. In the best tradition of the Clash, Against Me! serves up protest rock with a nod to Woody Guthrie and the folk tradition and scream-along punk that won't let you stand still. Continue to challenge the boundaries of punk rock in an effort to further develop their sound, while ensuring that their mix of punk, folk, country, and blues was properly represented in the recording, Jay Robbins (Jawbox, Burning Airlines) was brought on as engineer/producer. The resulting 14 tracks tell a tale of the highs and lows of the band’s experience with their growing popularity, and their struggle to maintain their identity throughout."Miami" the opening track for this album is a rousing song that’s certainly going to become a crowd favorite for its sing-a-long friendly chorus, the band added horns to this song for the bridge. However, what really stood out the first time I heard this song was the lyrics. What makes this album a bazillion times more amazing and a bazillion times more meaningful is the content and substance to each of the songs. Likening their current situation to being in shark-infested waters, Against Me! have become the kings of the extended metaphor.
With political and intimate lyrics and edgy punk rock music, Searching for a Former Clarity is sure to satisfy anyone with a passion for good, hard music.

Watch Searching for a Former Clarity fans made video
Download album
Posted by Garage Grindhead at 11:53 PM No comments: Links to this post 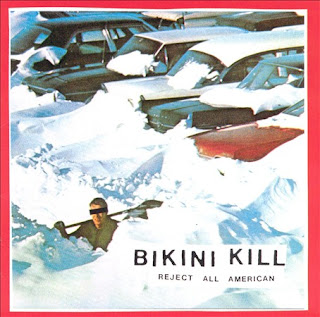 This was the 2nd full length and the last known studio album by these American Riot Grrrl band. Contains 12 tracks and all materials written and composed by the front female vocalist; Kathleen Hanna under Kill Rock Stars Records in 1996.
In This Album, their righteous, electrified punk had dissipated in lieu of slower, almost wistful pop melodies, many of which feature vocals by drummer Tobi Vail and bassist Kathi Wilcox. An expanded range from the two-minute slices of attitude like "Capri Pants" and "Statement of Vindication" to the alt rock of "False Start" and the classic new wave pop of the title track, Reject All American finds Bikini Kill in transition and in their element at the same time.
Bloody Ice Cream" — the most feminist song on a record by a band that built its whole existence on angry screeds — and singer Kathleen Hanna's exasperation peaks on "Jetski," in which she protests, "I ain't got no candy for you… I'm not your footnote, freakshow or your latest cause." By the time "Finale" rolls around and Hanna sings the anthemic chorus, "Time to go," you know she's right. well, If you like your punk rock tuneful, Reject All American will make a fine addition to your collection.

Posted by Garage Grindhead at 1:34 PM No comments: Links to this post

Agathocles - This is not a Threat, It's a Promise. 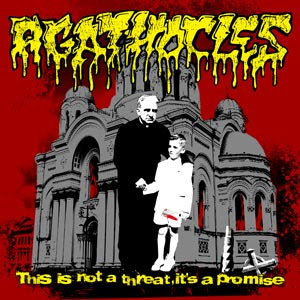 After more than twenty five years existence and the monumental last known studio album in 2009 entitled "Grind Is Protest", the mince core living legend get back with their 2010 studio album called "This is not a Threadn It's a Promise" that released under Selfmade God Records.
Everything on this album is still as simple as it ever was for Agathocles, but what we get back is a catchiness I haven’t heard from them in a while. The songs have slowed down, the vocals have changed, and a new groove in the sound makes “This is a no Threat” a great musical return for these Belgians. The Punk Rock tunes on “God Save The Real Green Crocodile” in the vein of the UK Subs are a delight to listen to. The lowered vocals paint a contrasts with the music that is better than ever and they have lost none of their lyrical criticism. The thing that stands out is the rumbling growl almost doom/sludge tone in the anthemic punk-like riffs alongside some killer d-beats that gives the tracks that ideal wrecking ball effect as they crash straight into your brain. Definitely brutal and unforgiving old school blasts that will make anyone stop and go “What the Fuck?” before responding in favor or against. AGATHOCLES frontman Jan AG comments: This album contains all elements which AG uses to create their brand of mince core. Going from raw punk to d-beat to old-school straightforward grind, backed up with three different vocal styles. This time the lyrics deal with topics like losing your job and waiting for the repo man, scenesters, elections, the worldwide economic crisis, modern technology and the rise of Big Brother, and more. Get ready for another old-school, raw, mince core blast!

This site does not store any files on its server. We only index and link to content provided by other sites. All credits goes to original uploaders. All files here are not on this site and perhaps offered only for a limited time, so if you're interested, come frequently and download them as soon as possible.

Searching Something In My Blog?